Remote sensing of soil moisture and rainfall in the study area

An important asset of the project will be the exploitation of satellite products for rainfall and soil moisture to be employed for improving the hydrogeological monitoring in the study area. Indeed, in recent years satellite products have reached reliability and accuracy levels that enable their implementation in applications such as the Early Warning System for hydrogeological-hydraulic risk mitigation, which is the topic of the present project.

For soil moisture, different remote sensing platform will be investigated during the project. On the one hand, a very new soil moisture product will be available in the near future by using Sentinel-1 images by ESA (European Space Agency), featuring a fine spatial resolution (1 km) and a revisit time of ~7 days. On the other hand, coarse resolution soil moisture products (~20 km) characterized by daily temporal resolution and higher accuracy (e.g., SMAP–Soil Moisture Active and Passive, SMOS–Soil Moisture Ocean Salinity, ASCAT–Advanced SCATterometer) will also be used. Additionally, an innovative approach named SM2RAIN will be considered, which allows integrating rainfall products with higher accuracy and resolution to be obtained through the optimal integration of rainfall and soil moisture data. More in details, SM2RAIN algorithm will be used to estimate rainfall through satellite (and in situ) soil moisture observations. These will be integrated with state-of-the-art rainfall products (e.g. GPM) in order to create a superior precipitation dataset over the study area.

Satellite products will be firstly evaluated against ground observations of rainfall and soil moisture for determining their accuracy and for the selection of the best products to be implemented in the Early Warning System. It has to be noted that the remote sensing observations validated in the project will also be employed easily for other applications in the area, such as agricultural planning, water management and drought monitoring.

Database of satellite rainfall products for the study area: Month 5;

Scientific analysis of satellite products in order to select the more suitable products for the completion of ANDROMEDA project: Month 10. 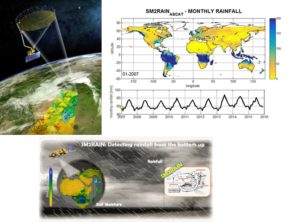 With the contribution of: